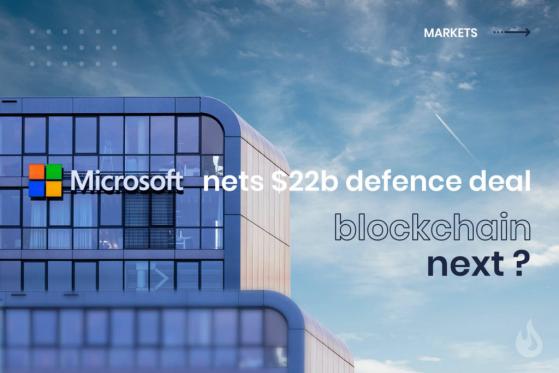 Is Blockchain Ready To Be Used For Defense?

Microsoft has recently signed a deal with the US Defense Department to provide them with 120,000 HoloLenses. The devices are an augmented reality concept, which Microsoft (NASDAQ:) has developed specifically for the army. The contract signed by Microsoft was set at $21.9 billion and will last up to 10 years.

Blockchain technology has not only disrupted financial systems and centralized entities but has also created new ways to protect information and increase security. Since 2016, blockchain has provided the Department of Homeland Security with heightened security levels. The potential to apply blockchain in defense has also been recognized globally as China and NATO have expressed their views concerning the use of the technology.

What Problems Is Blockchain Solving?

Governmental institutions such as the US Defense Department face issues with the trustworthiness of their contractors. Therefore, they demand that all contractors are held accountable for their partners and the supplies that they provide. That prevents bad actors from being directly involved with institutions that are critical for the country’s security. Blockchain technology can increase trustworthiness as it can verify and track the path of contractor components.

The Defense Department has created protocols that contractors need to meet in order to provide services to the military. In 2018, the US Congress approved the use of blockchain for potential offensive and defensive applications because it safely secures data through the distributed ledger. This increased blockchain’s entry into the defense market.

In 2018, NATO reported that they would incentivize cybersecurity applications for defense purposes, thus increasing the use cases blockchain can provide. Russia increased its exposure to blockchain for military purposes in 2018, researching how the technology can help prevent cyberattacks on military institutions.

Using or similar blockchains that deploy smart contracts adds assurance on the progress of military supplies. It allows the military to understand the current status, progress, and availability of their resources. Permanently embedding data into smart contracts offers real-time data on the stock materials.

In 2016, the US Ministry of Defense began studying the implications of using blockchain technology to secure and protect data on weapons, including ballistic missiles. Blockchain increases information security as it safely stores codes on distributed nodes. Governmental bodies can create private blockchains where nodes are deployed and operated by trusted entities.

Theta is a great use case as it uses enterprises such as Google (NASDAQ:) to deploy and run nodes. Although they seem centralized, the military would not risk delegating verification and blockchain security to outside entities.

Is Blockchain Suitable To Be Used In Defense?

Microsoft’s 2019 deal with the US Defense Department represents a major milestone in the hybrid use of blockchain with existing centralized cloud services. Microsoft Azure creates a sandbox for institutions to get the most out of their cloud service while unknowingly using blockchain technology. A similar solution could be Filecoin, which is a decentralized cloud service; however, unlike Microsoft, it does not have the trustworthiness that critical sectors demand.

Research on the use of blockchain for defense purposes has highlighted the disruptive nature of the technology. Governmental bodies can use it to transform and improve cybersecurity, defense logistics, and supply chain management. The development and implementation of the IoT and augmented reality through the HoloLens demand a safe network to interconnect all elements. As the technology progresses, and military personnel become more technologized, blockchain will add another level of security in a world where cyberattacks and hacks are becoming the new digital form of war.

NFTs in Beijing — ‘Who gets to decide the value of art?’
Scroll to top