São Paulo – A system aimed at revolutionizing business transactions between Brazil and the Arab countries, Ellos Blockchain was launched on Tuesday (20) during the Economic Forum Brazil & Arab Countries.

The Ellos Blockchain was developed by the Arab Brazilian Chamber of Commerce (ABCC) and is a chain of records of commercial, banking, trade and export transactions, ABCC Information Technology manager Marcos Bulgarelli said. “It is like a database of recorded transactions, like a virtual ledger,” he explained. Each information generates a record line that is replicated in several servers across the world, thus assuring security and preventing frauds.

“Each blockchain has its own series of cryptographed, highly secure information. Therefore, all transactions are stored and can’t be changed or deleted,” Bulgarelli said. A blockchain network can be public or private, and the members can type in and add information. Everything must be validated by the entire chain, not a single point, thus decentralizing the process.

In the second day of the forum, a cooperation agreement was signed between the ABCC and companies and institutions that are part of the initiative: the Brazilian Animal Association Protein (ABPA), with its president Ricardo Santin; Brazilian Beef Exporters Association (ABIEC), with president Antonio Camardelli; Fambras Halal, with president Mohamed Zoghbi; certifier Cdial Halal, with president Ali Saif; and logistics operator Maersk, with platform Tradelens commercial manager Nicolas Buhmann. ABCC president Rubens Hannun signed the document. Jordan is part of the agreement, and the system will start operating with that country.

ABCC secretary-general Tamer Mansour was also there during the signing. He said that the entity signed a partnership with Jordan around a year ago to start making the certification process digitally. “Since then, we started working hard to create several digital aspects to ensure security. If the pandemic brought something good, it was this reduction of bureaucracy and fast-tracking documents digitally. That’s when we finished our blockchain system and created a full platform,” he said.

Mansour said that the system has two purposes. “First, that our members and partners can enjoy the platform, schedule B2B meetings, use online schedules, virtually showcase products, etc. But when we talk about Blockchain, it’s something else entirely,” he said. “The second phase is assuring the Arab consumer that everything they buy from Brazil is transparent, high-quality, and halal-certified, if needed,” Mansour added. 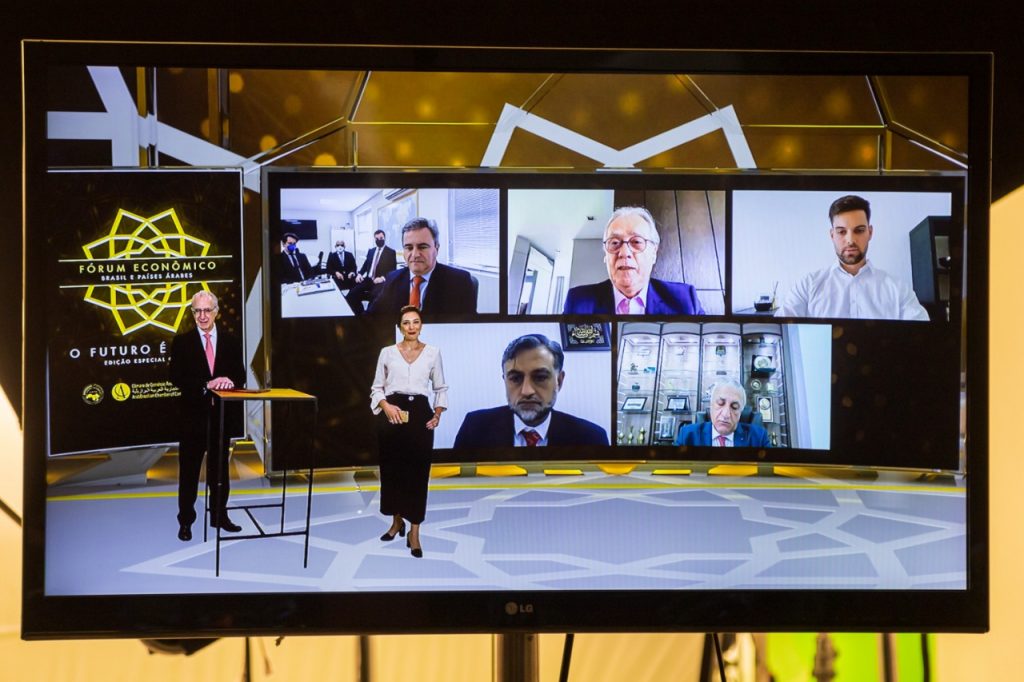 Entities and companies are commited to the Ellos Blockchain platform

Santin said that this is an opportunity to increase and establish their partnership with the ABCC and others. “We exported over 1.1 million tonnes to the Arab world year-to-date through September, almost USD 2 billion, something around 44,000 poultry trucks worth. Now we reinforce it, moving on to the Blockchain with a higher security in our relations and strengthening our partnership with the Arab countries,” he stated.

According to Camardelli, one in four kilos of beef exported from Brazil goes to the Arab countries. “This shows the significance of this process as a whole. Let’s move forward, and we hope to break into new countries,” he stated.

“Fambras could not be left out of an initiative that proves the security and quality of our halal processes and products by assuring a fairly comprehensive traceability, and it’s this relation of transparence with the Arab and Islamic consumer what has turned us into a major halal exporter,” Zoghbi said.

Saifi said that this initiative and the new technologic system will take the business with the Arab world into the 21st century and gain speed in transactions.

Buhmann said he was excited to sign a cooperation agreement with the ABCC. “We stand united in the desire to move forward and lay the foundations for us to have an even greater collaboration,” he said during the virtual meeting. Tradelens is a global initiative by Maersk aimed at speed-tracking and digitizing processes.

ABCC president Hannun thanked each partner for accepting the initiative. “I’d like congratulate all of you for the vision. We talk about dreams, about future, and we’ve arrived there. The future is being built and implemented,” he said.

Check out the full coverage on ANBA.

Notify me when
IOUR Foundation Looks to Redefine the Internet with Blockchain based Competitor...

Blockchain Proposal from the Prime Minister of Kyrgyzstan
Scroll to top