The UK is one of four nations best positioned to take advantage of new Blockchain technologies, according to a new study. While the broader UK economy could be boosted by £57 billion by 2030 by the technology, the public sector stands to receive the biggest boost – thanks to the efficiency Blockchain can bring to cyber security efforts.

Having come to prominence as the technology underpinning Bitcoin, Blockchain initially burst onto the scene in the financial sector. Over the following hype-filled years leading to 2019, it then made waves in almost every other industry, from energy to freight and logistics, to sustainability, to the automotive sector, as clients in every segment from insurance to retail press their consultants for advice on how to exploit, or defend themselves, from its disruptive impact.

While it had seen a great deal of excited uptake, however, interest cooled dramatically in 2019. The volume of trade through various blockchain schemes was found to have been so negligible that many leading researchers were left wondering how soon Blockchain might reach a critical mass, if at all. Now though, after that lull period, a new study from PwC suggests that the increasing emphasis on managing sensitive work from home means Blockchain may finally come of age amid the coronavirus pandemic. 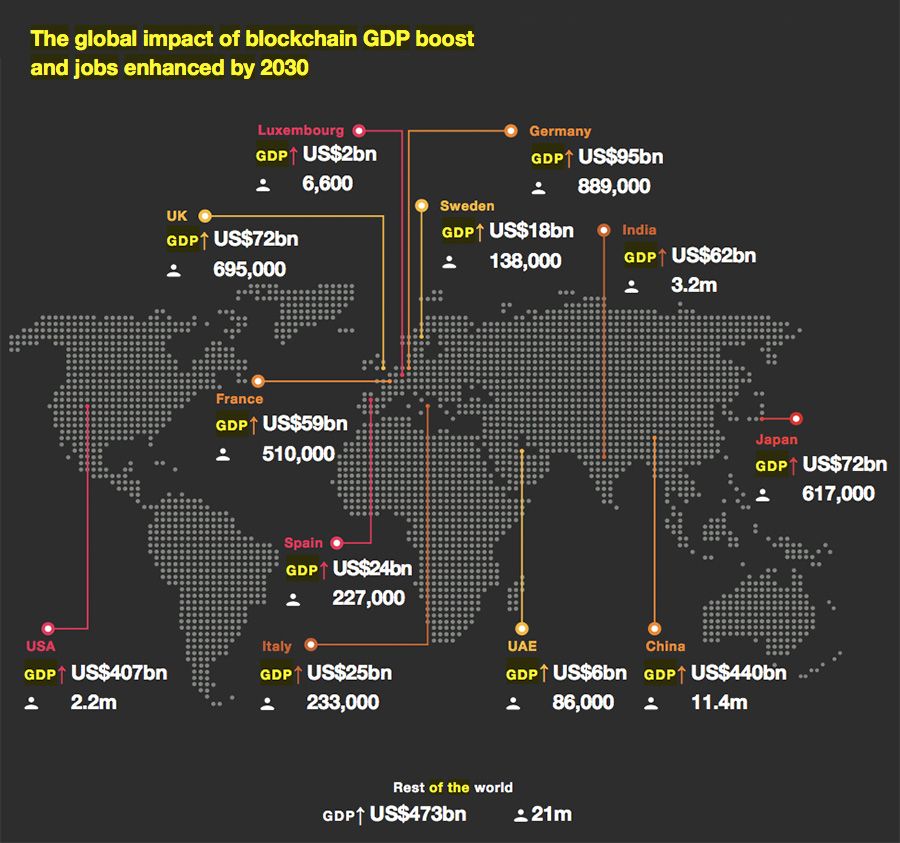 The study found that the global economy could receive a massive boost from Blockchain over the present decade, with the UK in particular well positioned to benefit. Behind the US and China – both of which PwC believes will benefit to the tune of $400 billion – the UK and Japan could see the next largest impact on their economic potential, receiving a GDP boost of $72 billion (£57 billion) each.

As has long been expected, tracking and tracing products and services is the application of Blockchain which will likely have the largest economic potential – with the end-to-end security of shared ledger technology allowing for thorough evaluation of a product’s journey from procurement to manufacturing to consumer bringing around £30 billion in benefits. Interestingly, however, the public sector looks set to be the biggest beneficiary of Blockchain due to this.

According to PwC, Blockchain technology will bolster public administration, education and healthcare in the UK to the tune of $29 billion (£22 billion) by 2030. The bulk of this will come from capitalising on the efficiencies Blockchain will bring to the world of identity and credentials. Identity management including personal IDs, professional credentials and certificates to help curb fraud and identity theft alone could be worth a $10 billion (£8 billion) boost in the next ten years alone.

Steve Davies, Global Blockchain leader at PwC, said, “Blockchain has long been associated with crypto currencies such as Bitcoin, but it has much more to offer, particularly in how public organisations secure, share and use data. As organisations grapple with the impact of Covid-19, we have seen an acceleration in many disruptive trends. Our analysis shows the potential for Blockchain to support UK organisations in how they rebuild and reconfigure their operations, underpinned by improvements in trust, transparency and efficiency.”

Elsewhere, there will be broader benefits for the business services of $19 billion (£15 billion), wholesale and retail of $17 billion (£13 billion) ($17 billion), and communications and media of $6.7 billion (£5.3 billion) by 2030. They will benefit from using Blockchain to engage consumers and meet demand for provenance and traceability.

Davies added, “One of the biggest mistakes organisations can make with implementing emerging technologies is to leave it in the realm of the enthusiast in the team. It needs C-suite support to identify the strategic opportunity and value, and to facilitate the right level of collaboration within an industry. Establishing proof of concept uses which can be scaled up if successful will enable businesses to identify the potential usages of Blockchain, while building confidence and trust in its ability to deliver.”

Notify me when
Blockchain Proposal from the Prime Minister of Kyrgyzstan